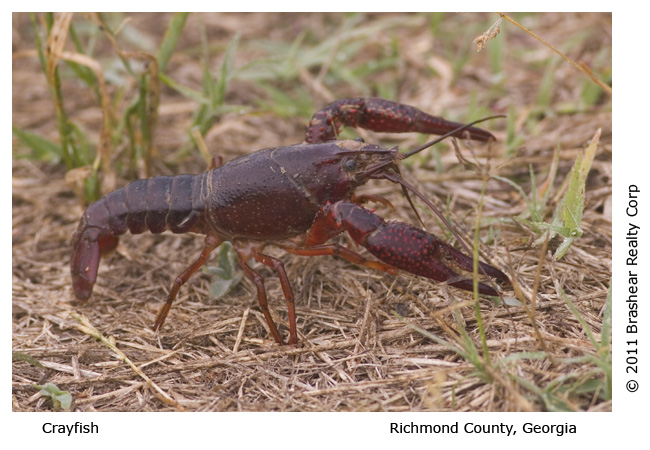 If you were a child growing up in the south anywhere near creeks, streams, or backwaters you probably encountered these strange looking water creatures that were reminiscent of minature lobsters.   We called them Crawdads, but any of the names above are common.  Actually this species is a form of freshwater crustacean in the same family as the lobster.  Their only obvious distinction is their diminutive size.  Their size is anywhere from the size of a matchhead to about 5 inches long.  The Crawfish above is a full 5 inches.

As you might expect, as a youngster it never occurred to me that they were edible, nevermind tasty.  If you came from Louisiana you probably recognized them as the delicacy they are.  Indeed Crawfish is a staple in Louisiana and as Cajun cuisine is becoming more popular so is the lowly crawfish.  Typically cooked in a crawfish boil, the crustaceans are first purged, then cooked with spices, and other vegetables and served still in the shell.  An experienced crawfish afficianado will quickly break off the head and can be heard “sucking the crawfish head.”  While it sounds somewhat unappetizing the practice actually extract one of the best parts of the crawfish.  The other edible parts are in the tail and in the claws.

Want to try cooking them yourself at home:  try these folks www.crawfish.com

Crawfish can be trapped in the wild but in actuality most crawfish for consumption come from commericial crawfish farms.  Domestically the majority come from Louisiana, but in recent years China has imported increasing numbers of Crawfish into the United States.

Tice Brashear is the President of Brashear Realty Corporation. He is a licensed real estate broker and has over 37 years experience in selling land, farms, acreage, commercial and investment properties. He is a past President of the Georgia Association of Realtors and a past President of the Augusta Board of Realtors.
View all posts by Tice Brashear →
This entry was posted in Fishing, Uncategorized, What is it?, Wildlife and tagged Crawdad, Crawfish, Crayfish, Mud Bug. Bookmark the permalink.