The Big Land Squeeze, the Urbanization of America 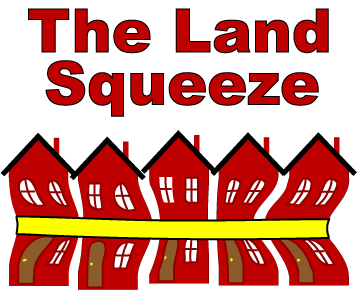 If there is a great paradigm of our country that seems almost unnoticed, it is the urbanization of America.  The arable lands are dissappearing into high rise condominiums and urban sprawl.  Certain states, like Florida and California, have effectively depleted their most precious resource, land.  While some might argue that much land is in this country is still uninhabited, most of it is desert.   The dwindling supply of land is driving prices higher.

If you compare our land environment with Europe, where land has been depleted for centuries, you can see where we are headed.  Land that can be developed is so expensive in Europe that only the very wealthy can afford it.  If you don’t inherit it, you may never be able to afford to own so much as a place to put a flower pot.  When you compare median incomes with median home prices, the differences are startling.

Georgia is just beginning to suffer urbanization.  I own a map that was made at the time of the civil war.  Atlanta was the size of a small village.  Now the urban areas surrounding Atlanta encompass truly one third of the state of Georgia.  The urban areas of Augusta, Savannah, Macon, and Columbus consume their share of land.  While Georgia still has a large supply of woodlands, croplands, and natural forests, it seems clear that the ability of common people to own such properties will be diminished in our lifetime.

While we profit from the sale of such properties, I can’t help feeling ambivalence at such urbanization.  On the one hand it is lucrative, but on the other it is destroying the natural beauty which I love.

A true environmentalist is not someone who donates to the various organizations who claim to represent the environment, but to take a personal positive step to preserve such resources for the future.  I can only urge you to buy these resources and keep them in your family, so that they and their progeny might have a chance to enjoy the real Georgia.  If you don’t that chance at a legacy may be gone before you know it.

2 Responses to The Big Land Squeeze, the Urbanization of America