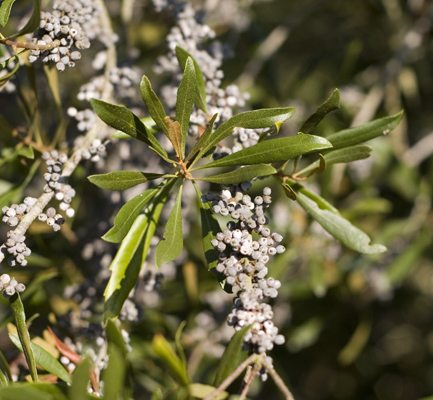 The Wax myrtle has several different common names.  It is also commonly called Candleberry and Southern bayberry.  Commonly found on the wetlands of Georgia’s streams and ponds, its berries are an important source of winter nutrients for birds and other small animals.  The fruits ripen around October and usually remain until eaten.  The name of this bush is taken from the covering of the berries.  Early settlers valued this plant for its wax like covering on the berries.  By harvesting the berries and boiling them, a wax would be deposited on the surface of the boiled water.  This wax was used to make candles.  The candles were fragrant and were absent some of the sootier properties of other waxes.  The only drawback to these candles was its brittle nature.  You can still buy bayberry candles today however they are usually mixed with other waxes to make them less brittle.  Bayberry candles tend to be expensive since there is obviously a good deal of labor involved in their creation.

Waxmyrtles are also highly flammable and when they grow in large areas it should be a cause for concern.