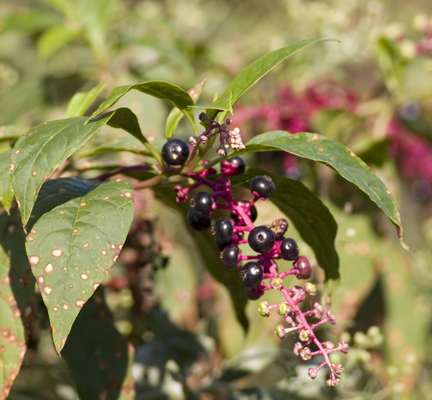 This time of the year our forest are peppered with a large weed with dark red or almost black berries.  Frequently I am asked if they are edible.  The general answer is no, they are poisonous.  Birds do eat the berries but generally excrete the seed whole without crushing the poisonous seed within.  Human metabolism is prone to digest the poisonous seed and cause nausea and perhaps death if eaten in sufficient quantities.  The leaves are also poisonous, however early settlers figured out that Pokeweed leaves can be eaten if the leaves are boiled, drained and this is repeated several times.  Since this was a difficult process, Pokeweed leaves were an alternative of the poor.  The concotion of Pokeweed leaves is quite often referred to as Polk Salad.  The song “Polk Salad Annie” refers to a person of poor status since she ate Polk Salad.  The Indians also used Pokeweed berries as dye for red or brown colors.  Settlers also sometimes used it as an ink substitute.

One Response to Pokeweed